Today in my series of interviews with sewing bloggers on their connection between sewing & style, I’m delighted to feature Cindy of Cation Designs. I immediately took to Cindy’s blog when I first found it, only a small part due to the fact that she is a fellow scientist. “I’m pretty sure choirs sang as I frolicked through a proverbial field of kittens and unicorns while the air filled with the scent of peaches” may be one of the best descriptions of discovering sewing ever and I completely agree with her that unique clothing is “like wearing a kindred spirit dowsing rod!”

Hello! I’m Cindy and I blog over at Cation Designs, and I’m so excited to be guest posting here at Seamstress Erin’s about sewing and how it has affected my personal style. When Erin first emailed me, I have to say, my first thought was “Could bed sheets even be considered a style?” Because let’s face it, most of what I’m “known” for (if I may be so bold as to claim being known for anything) is sewing dresses out of thrifted linens. But if I had to describe my me-made wardrobe without referring to the fabric source, I would describe it as Ms. Frizzle. I guess that’s suitable, considering that I’m a science teacher by trade. What that breaks down into, though, is any fun, colorful print that catches my eye, the more offbeat the better!

It’s funny, I used to love the Magic School Bus books when I was younger, and I would always look to see what Ms. Frizzle was wearing and how it related to the lesson of the day. And while I don’t think I ever specifically thought that I wanted to be her or dress like her one day, I sort of fell into teaching science, and then I started sewing, and well, everything just sort of fell apart from there! 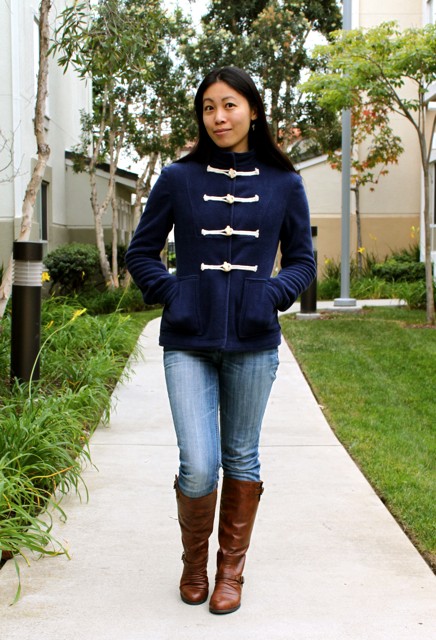 See, I started sewing when I was overwhelmed with teaching ninth grade physical science. I was mentally exhausted by the 14-hour days, all the lab set-up and planning (three different preps, all lab classes, two of them AP), not to mention the grading and parent conferences and all sorts of other random tasks that come with teaching. I knew I had to do something creative or go crazy, so I started looking up DIY and craft blogs, which led me to sewing blogs, and at some point I realized that there were real live people out there who just thought about what they would like to wear, and then they would just make it. That idea was revolutionary to me; I hadn’t even known that there was an option other than mass-produced RTW! It’s such a cliche, but suddenly my eyes were opened to all of the possibilities out there. I’m pretty sure choirs sang as I frolicked through a proverbial field of kittens and unicorns while the air filled with the scent of peaches — because that’s totally what I felt like. Mind you, at the time, I had no idea what I wanted to sew. I didn’t really have any idea of what my style was, but somewhere in the back of my head was the idea that I needed to learn everything about sewing. I spent a good year just reading sewing blogs before I even attempted to sew a “real” garment, i.e. something that wasn’t just a stretchy tube with a belt around the middle.

Once I sewed my first dress, I was hooked. You mean that 2D piece of cloth can be shaped into a garment that fits and covers a 3D body?! You don’t say! That was my second epiphany — suddenly, everywhere I looked, I saw potential clothes. That quirky duvet cover at IKEA covered in hippos? Could be a dress! That jersey bed sheet that’s too scarily red and blood-like for peaceful sleep? Could be a dress! That pretty floral tablecloth that vaguely reminded me of Scarlett O’Hara? Could be a dress! I started collecting fun textiles that I thought would make fun clothing, and just like that, my stash (and subsequent Ms. Frizzle-esque style) unwittingly began. 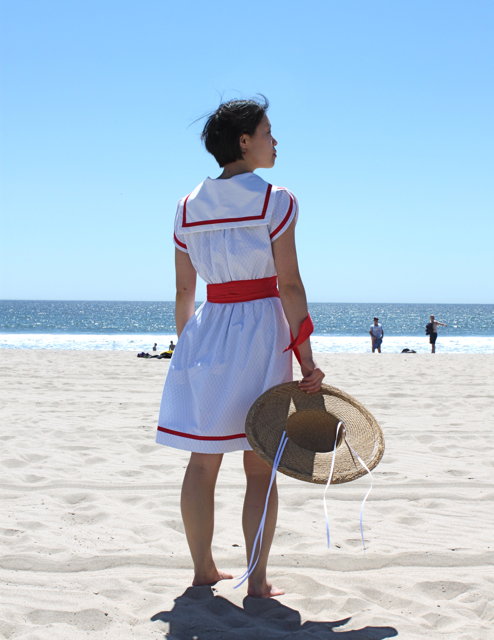 Since my stash started in such a magpie-ish fashion (i.e. “Oooh! Shiny! That looks like a fun fabric!” *throws into the shopping cart*), my wardrobe is actually fairly uncoordinated. I’ve got a whole bunch of unique dresses that stand out, and even the “normal” fabrics got turned into dresses that lean toward the costume-y side. This isn’t usually a problem, though, since dresses are essentially an already coordinated top and bottom. Throw on a cardigan and some fun shoes, and there’s an outfit! It might not match any of the other outfits in my closet, but when would one ever wear two outfits at the same time? Anyway, I’m lucky that as a teacher, and especially as a science teacher, I’ve got a little more leeway in what I can wear to work in terms of colors and prints. My only real restriction is that I try not to wear any licensed characters (which means no superhero dresses!) to school unless it’s a school spirit day that involves themes (e.g. dress like a superhero). That’s just a self-imposed rule, though, since I don’t want to give parents or admin any reason to complain that I’m subtly endorsing an unapproved message or anything!

Even though I didn’t originally start sewing with the aim of developing a unique style, it’s been remarkable to see how sewing has helped me become more confident in who I am, which then gets represented in what I wear. Those first several months of sewing, when I was still figuring out the basics, I was just so proud of making a wearable garment that I would wear it out in public regardless of whether it looked “Becky Home-Ecky” or not. And you know what? Nobody told me that I looked like a home ec drop out! Instead, they were just amazed that I had taken the time to learn a skill that allowed me to (dubiously) clothe myself. I realized that unlike middle school, nobody really thinks that much about me and what I’m wearing, which meant that I could get even further off the beaten path if I wanted to. Because I started sewing with not-quite-normal fabrics, it just means that the dresses can get even weirder as my skills develop. I’ve enjoyed coming up with ways to enhance my print choice with my pattern/design choices. 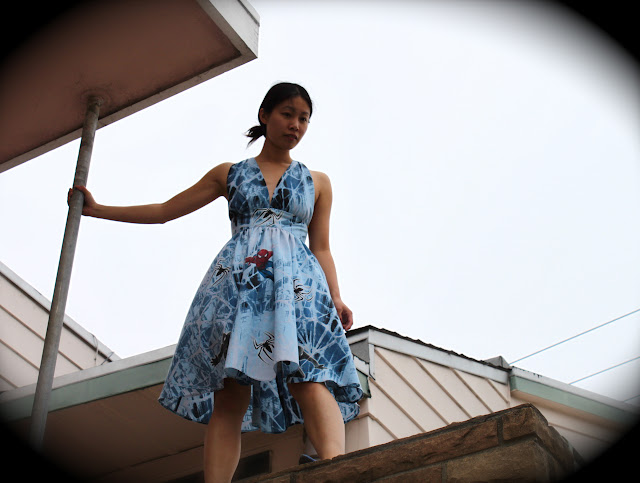 Lately, though, I’ve become less focused on making lovably bizarre dresses and more focused on making items that could pass as RTW. I’ve been wanting to challenge myself in the area of making my own patterns and making more complicated items, which has translated into a lot of knit garments, as well as pants and a jacket. Even in those more “normal” garments, though, I’ve tried to inject a little bit of whimsy. This refusal to take things too seriously also comes out in the form of trying to get away with not spending a lot of money on fabrics. I’m a bit of a cheapskate at heart (I blame my parents), but I also want to prove that having a fun, unique wardrobe doesn’t have to be an expensive endeavour. I wish I could afford to buy all the animal-print clothes at Anthropologie, but you know what? Even if I could, I wouldn’t even be unique, because anyone else can buy those same items! Hence, the need for “Put a Cat on It!” week.

When I first started sewing, I wasn’t sure if it was going to be a passing phase. I’ll be honest, my hobby history is a long and cluttered one, and while I still occasionally dabble in other crafts like felting, pyrography, or prop-painting, they haven’t had  much staying power. Now, though, I can’t imagine what it would be like to stop sewing and have to go back to the same RTW that everyone else wears. Not only is sewing an excellent mental exercise and psychological release, it also allows me to be creative in the way I dress. This may not seem like a huge deal, but for someone who has a hard time coming up with small talk, a quirky dress can be a conversational lifeline! I’ve also found that when I meet people who are attracted to my most Ms. Frizzle-esque outfits, those tend to be people I connect best with. It’s like wearing a kindred spirit dowsing rod!